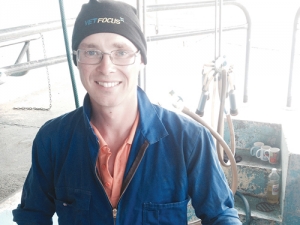 Last season Tirau 50/50 sharemilkers David Noble and Katy Jones’ milk had an average somatic cell count of 77,000, making it a better quality product than 98% of all other New Zealand Fonterra suppliers.

While the couple started off with a young herd with a naturally lower propensity to SCC, Noble attributes the jump in quality to a change in rubberware, from rubber milk liners and tubes to the plastic DairyFlo alternative.

“This reduction in BSCC wouldn’t have been able to be achieved with poor quality milk liners so it was definitely a factor,” says Noble.

The contract, which is the couple’s first undertaking as sharemilkers, began two seasons ago when they bought the herd off the previous sharemilker as a going concern.

They have implemented a few different management practices which have contributed to a reduction in BSCC. An important one is using a dry cow teatseal combination at drying off and being meticulous with teatspraying but having a liner product which doesn’t perish or split.

He first learnt of the milk liners and tubes in a 2014 Dairy News article and was ultimately interested in the weight reduction and extended life potential of the soft plastic components over their rubber counterparts.

“Rubber compounds are not used in the food chain anywhere else these days, so why are we still using it.”

Noble milks 150 cows through a 10-aside herringbone shed twice a day for three quarters of a season and says the process of putting cups on up to four hours a day resulted in sore arms and wrists, especially in spring, but the lighter new liners have helped.

A reduction in time replacing plant components was also a big attraction, he says, with DairyFlo milk liners and tubes lasting on average a full season, or 6600 milkings last year on his farm. The previous product he used had a recommended replacement every 2500 milkings, meaning that each season the liners would need to be changed two or three times.

With no need to change the liners again in a season there was also a financial saving. “I hate changing liners so the fact that I didn’t have to change them so often was a huge bonus.”

This comes as no surprise to product developers.

Justin Gleeson, New Zealand business manager for Covestro, a company formerly called Bayer Material Science, which has assisted in the development of the DairyFlo line of products, says secrets of this development lie in the soft plastic. Being smoother and less porous than rubber, it reduces the risk of contaminants getting into the milk in its journey from the teat to the vat.

“Not only do bacteria enter via the porous rubber, also the milk is exposed to lipids, cleaning and disinfecting agents and other chemicals.”

Noble says company representatives worked with him to make the transition to plastic liners a smooth process although Dairyflo general manager Eddie Crawshaw says changing liners and milk tubes is a process which shouldn’t be taken lightly.

“Some companies use compatibility charts to match an existing brand with another brand. We would rather go back to grassroots and measure the equipment and match our liner that best suits the herd.”

“The most common diameter is 22mm for Jersey and Kiwi cross herds or 23mm for bigger Friesians.”

However, once this is done other changes need to be made to ensure the correct level of vacuum is used to get the most milk out of cows in the safest and most comfortable way.

Dairy plant specialists recommend running a vacuum setting of 38kPa at the cups, a rating Crawshaw says is achievable by matching the vacuum put out by the vacuum pump and the height between the milk line and the cups.

Lowline systems – where the distance is less than 1.2m – require pressures around 40-42kPa, and systems where the cup is 1.8m from the milkline require the pump to work at about 48kPa.

Noble says making milkings as smooth and easy as possible plays as big a part as vacuum level on somatic cell counts because calmer cows are less likely to produce white blood cells.

“I let cows come in on their own and have a quiet, calm environment for them to stand in. Putting The Breeze or Coast on the radio helps.”

While most cows in the herd let down milk quickly, he says there are one or two slow milkers, which he manages by ensuring they go where they can milk out properly without affecting the flow of the milking.

“With such a small herd you get to know which cows will be slow so you make sure they go into the row where they can let their milk out in their own time.”

An in-shed feeding system ensures the cows usually get some form of grain during milking.

Grains and a summer crop of turnips will become even more important through December, says Noble, because the area can get very dry, limiting the amount of pasture available.

Noble plans to milk every 16 hours in the new year. It is a compromise which helps maintain cow health and condition, allows greater milk production than milking once a day, reduces running costs of the shed and allows more time to make the most of summer.